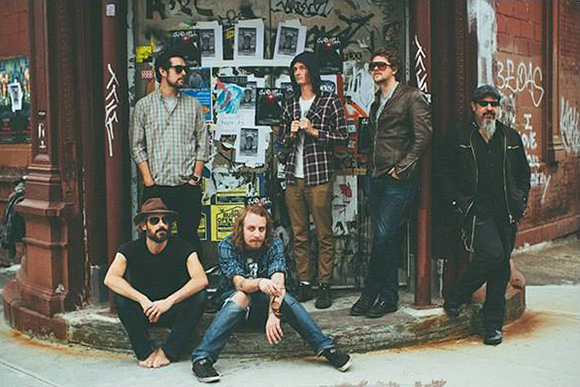 We have been eagerly awaiting for new material from the super-group side-project Diamond Rugs (featuring members of Deer Tick, Black Lips, Dead Confederate and Los Lobos) since they dropped the hint of new studio work to be released in 2015. Note: Their debut self-titled LP is one that is VERY near and dear to our hearts, and was actually our #1 record in our Top albums of 2012.

Well, wait no longer! Earlier today via KCRW, the band premiered the new track ‘Voodoo Doll,’ the first single from their forthcoming album ‘Cosmetic.’ And, as expected, the song delivers strong and picks up perfectly where the S/T record left off. Looking forward to hear the full record. 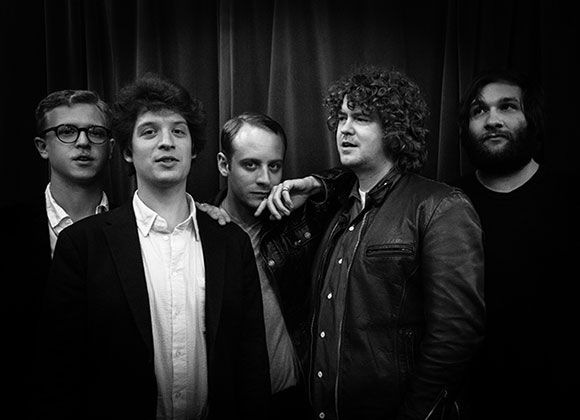 ‘Big House’ is the third and latest video from Deer Tick’s newest full-length, 2013’s ‘Negativity,’ which dropped via Partisan Records in September. Pick up your own copy HERE if you haven’t already (there are still a few left pressed in limited edition sky blue)… Deer Tick are currently overseas touring for ‘Negativity,’ but will be back in the Southeast in May for Atlanta’s Shaky Knees Festival. See full tour listing HERE:

While on the topic of the LP ‘Negativity,’ there is a killer track from that record called ‘In Our Time’ which features duet vocals from Vanessa Carlton, the singer/songwriter who is now going by Mrs. John McCauley… The now husband & wife were married in December by the one-and-only Stevie Nicks! How cool is that? Congratulations to the happy couple! And check out a live version of ‘In Our Time’ featuring Vanessa Carlton below: 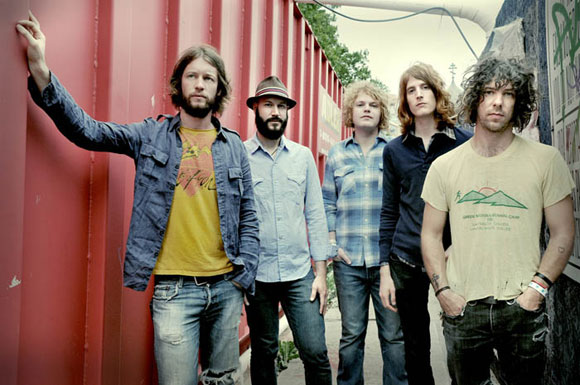 We love us some These United States and are not only excited about their upcoming show May 22nd at Rhythm & Brews opening for Heartless Bastards, but excited to hear their 5th studio album!

The self-titled LP drops June 12 and according to Paste Magazine, features tons of guest appearances including: John McCauley of Deer Tick, Michael Nau of Cotton Jones, Matthew Houck of Phosphorescent, Laura Burhenn of The Mynabirds, Ben Sollee, David Moore of Langhorne Slim, Josh Read of Revival and every member of Frontier Ruckus.

Pretty impressive if you ask us… To hold us over ’till June, check out the album’s first single ‘Born Young,’ available to stream below… and catch TUS at a city near you. Full tour listing HERE:

And just for kicks, here is our favorite TUS jam: 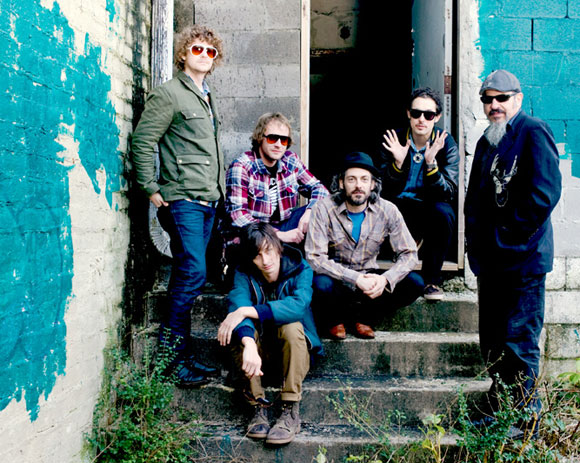 Diamond Rugs is yet another new indie-supergroup fronted by John McCauley (Deer Tick/Middle Brother) along with Deer Tick bandmate Robbie Crowell, Ian Saint Pé (The Black Lips), Steve Berlin (Los Lobos), Hardy Morris (Dead Confederate) and Bryan Dufresne (Six Finger Satellite). Their debut, self-titled album doesn’t drop until April 24th via Partisan Records, but while we were away, the band dropped the LP’s first single ‘Gimme a Beer’ for the whole world to hear. Check out the track below and download it for free HERE… If this is any indication of what the other tracks sound like, we’re in for a great album this April: 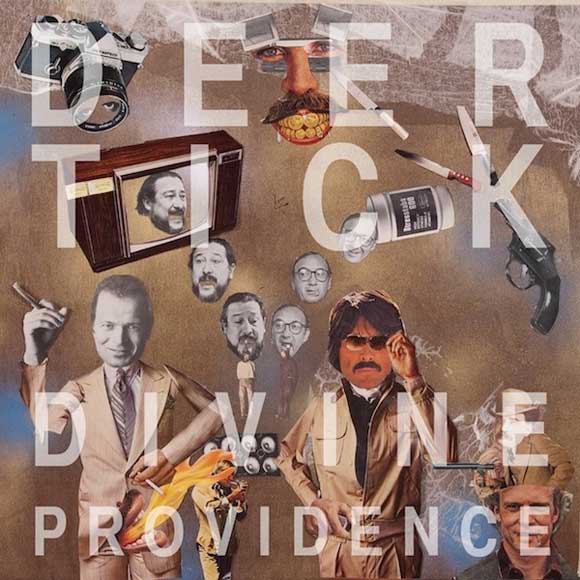 Deer Tick just premiered the first single and cover artwork (above) from their forthcoming album, ‘Divine Providence,‘ which hits stores October 25th! New York Magazine’s Vulture featured the song this afternoon which can be streamed below… If you’re diggin’ what you hear, swing on over to the link below and for the simple cost of an email address, the song can be yours! Album details and pre-order information forthcoming… Enjoy:

Jonny Corndawg is dropping by Chattanooga for this Friday’s Hell Yeah Fest (July 15th) at JJ’s Bohemia along side Shovels and Rope (featuring Cary Ann Hearst and Michael Trent), Roger Alan Wade, Joel Hamilton (of The Working Title), Matt and Marty Bohannon (of The Bohannons)…  and we had the honor of interviewing Mr. Corndawg himself!!! Get to know one of The South Rail’s favorite artists and get ready for his new LP coming out this August: 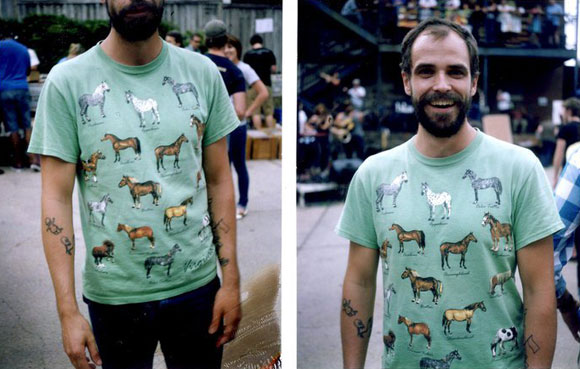 The first time The South Rail got a taste of the Corndawg was in Atlanta at The Drunken Unicorn a few years back, with DeerTick as your backing band. What’s your connection with John McCalley and the DT crew?

“That show was a nightmare for me. I remember it, but barely. It took place during the climax of my 14 day swine-flu. I remember praying for death that night but I don’t remember it ever answering my prayer.

I’ve know John for about 8 years or so. I met him through this guy he was touring with named Viking Moses. He and I fell out of touch for about 3 years and then I looked him up around the time that Myspace was worth looking at. I was thinking “I wonder what quiet little John McCauley is up to…” — so I got back in touch and finagled my way onto a tour with them and just stayed there. He’s one of my best friends. We have buddy tattoos in memoriam of a person who doesn’t exist.” 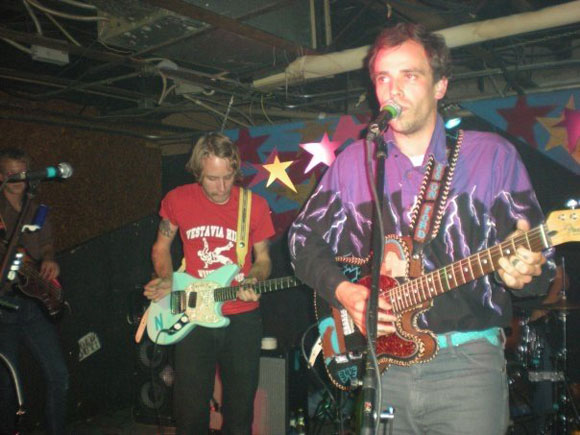 Do you have anything special up your sleeve for this week’s Hell Yeah Fest at JJ’s Bohemia?

“When up next to Cary Ann Hearst and Roger Alan Wade, how on earth will my double name ever match their triples?”

We love how you’ve documented your career on Flickr, showing your journey and influences throughout the past few years. Especially your air brush and leather work. What got you into these 2 mediums and how much extra cash do we need to bring to purchase these Corndawg originals?

“Some people are “say-ers” and other people are “do-ers”. I’ve always loved those two mediums but never knew anything about them. One day I just got tired of not knowing and I taught myself. Same goes for guitar but for all three, I really do wish I had someone show me a few things because I really don’t know what I’m doing up there.” 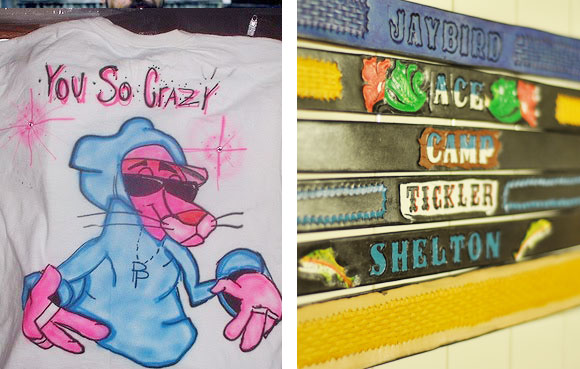 Back in Febuary, you had the short documentary, ‘Stray Dawg,’ made about you as you prepared to run the Surf City USA marathon at Huntington Beach, California. You also have a song titled ‘Keep Your Body Happy Through Exercise’ from your last LP “I’m Not Ready to Be a Daddy.” Have you always been an avid runner? And what were your main influences to run in that marathon?

“My dad is my main influence. This applies to the previous question as well. He’s a nurse by trade but he also is a blacksmith, a tailor, bike mechanic, marathon runner, bike road racer, he’s been a farmer, and he’s an amazing cook. Oh, did I mention that he builds banjos and has made 5 guitars and just got into making ukeleles as well? He’s the coolest dude ever and he taught me everything I know about figuring stuff out on my own. I just put it in a song recently. The song is about some people who were endlessly discouraging me, in NYC (about how I’d never get a record released because my music was too weird – it’s called Wrong Crowd) – the line goes ‘My daddy taught me to choose to be/ whoever I wanted to and he/ always encouraged me/ to be whoever the hell that it is that I am!'”

Your upcoming album ‘Down On The Bikini Line’ drops August 30th and in celebration, you are giving away the song ‘Chevy Beretta’ which features Caitlin Rose (see below). Are there any other guest appearances on the album? And is there anything specific you’d like your fans to know about the new record?

“Hell yeah! This is a star studded record. Chock full of incredible pickers and singers. John McCauley plays a pretty farty solo, Taylor Goldsmith harmonizes on Night Rider, Caitlin’s on almost every song, Tristen’s on a track, and the band was compiled of my favorite players in Nashville – it took me two years to get the band together for the record. Joshua Hedeley plays fiddle and sings backup (like a damn angel), Jordan Caress on bass, Ben Martin on drums and Rich Gilbert on lead guitar and pedal steel. I couldn’t be much more excited about this release.

Going back to what I was saying before about the wrong crowd – I can’t tell you how good it feels to have started my own label and gotten so many incredible people behind me on this. It’s a great big middle finger up to all the folks who told me it wouldn’t happen and it just feels so good.” 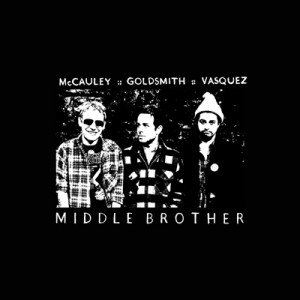 We’ve been looking forward to hearing this band since early last year when we first heard word of this super-group writing and recording in Nashville for what is now their debut album. At the time, the band — Deer Tick‘s John McCauley, Dawes‘ Taylor Goldsmith and Delta Spirit‘s Matt Vasquez — were going by the name MGandV… Now, almost a year later, we shall know them as Middle Brother.

The band has only played a rare handful of shows in 2010, but have now put together a small March run of dates in order to support their debut self-titled release, hitting shelves via Partisan Records March 1st… The album is a collaborative effort from all 3 lead singer/songwritters and includes appearances from Jason Isabell and South Rail favorite Jonny Corndawg.

…watch the performance of the first track off the album, ‘Daydreaming,’ live at SXSW (the band’s first live performance)…

… at catch Middle Brother, on tour this March. And while your at it, you can pre-order Middle Brother now on CD, Colored LP and Deluxe Edition LP with an extra 10” of b-sides from the Nashville recording sessions HERE:

John McCauley of Deer Tick is playing solo tonight for the Music City Roots weekly concert and live radio show at the Loveless Cafe in Nashville.

Tickets are $10, $5 with college ID (at the door or here). Show starts at 8:00pm EST (7:00pm Nashville time)…. Not in Nashville? Don’t worry. Stream the performance LIVE (and free) using this Music City Roots player here.